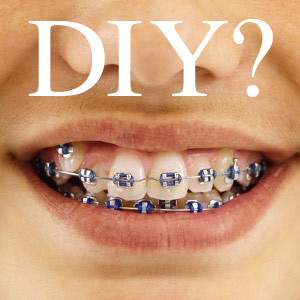 You may have read stories about people and their experiences with braces, and if you do not like the idea of bringing your child to the orthodontist every few weeks for a tightening appointment, the sound of a possible “Do-it-yourself” solution can be tempting.

Like many people, your child may dislike their crooked teeth and want to fix them. This means bringing them to the orthodontist and having them spend up to a year or more in treatment. This can seem like a long time to just simply align your teeth, so some people have turned to DIY methods to correct their child’s teeth thinking they will avoid trips to the Orthodontist and cost associated with it.  Even though these are cheaper and quicker solutions than visiting the orthodontist, in most cases, it’s a horrible idea for your child.

DIY braces as a solution to crooked teeth can lead to many other issues with your child’s oral health. Recently, a college student created his own braces for less than $60 and claimed that his teeth were fixed in under four months. According to a report in the Washington Post, quote: “despite Buzzfeed’s initial headline claiming that the DIY braces were safe, orthodontists say otherwise. ” Many doctors are certain that the college student has caused irreparable harm to his teeth which is easily spotted through an X-ray. Looking at his teeth from the outside, everything may look good; however, drastically applying pressure and moving your teeth in under four months can cause issues to the bone and gums. Also, if one of his teeth were misaligned, this can ruin his biting ability leading to unneeded wear on the teeth. Another problem this college student will face is relapse which causes the teeth to revert back to its original position. The issue of DIY Braces has become so widespread, that the AAO (American Association of Orthodontists) addressed the problem in a press release informing its viewers of the potential damage and harm these DIY Braces can cause.

In another attempt to fix crooked teeth, one patient took rubber bands to remove a noticeable gap right between his front central incisors. Instead of fixing the gap between the teeth, the band rode up the teeth into the gums and destroyed the roots for both teeth. This patient now has to get a more expensive and time-consuming operation that could have been avoided for heeding the orthodontist’s warning.

Even though getting treatment for your child from a licensed Orthodontist is more expensive than a DIY solution, they are going to get an expert’s supervision, a real doctor who can prevent any extra issues or risks caused by DIY methods. Visit Streamline Children’s Dentistry to improve your child’s smile!

Typically children have a very bad experience at a dentist visit and start to despise any future visits after that. This leaves them in a very bad mood during their visit and when parents start to tell their kids that “If you do not brush your teeth, then the dentist will make your teeth fall out” it is just adding more fuel to the fire and going to make their next visit worse. This is why we encourage parents who have children who had horrible dental visits to cheer their children up instead of talking bad about dentists.

2- FINDING THE RIGHT DENTIST FOR YOUR CHILD

We can guarantee by a simply free consultation to our children’s dental clinic 89014 you can expect supreme customer service and amazing dental operations in the future for an affordable cost. At Streamline, we also have an inexpensive dental plan that can fit with any family’s needs at a great price. There are a lot of rude dentists out there and we have heard horrible stories about past dental visits and at Streamline Children’s dentistry, one of our many objectives is to make visiting dental offices great again through thorough dental services and top dental care.

3- MAKE THE FIRST VISIT AN AWESOME ONE

Schedule a fantastic dental visit to Streamline Children’s Dentistry office today for your child to experience a positive and a fun dental visit. For your free consultation with our dentist, call 702-707-9158 or visit us today at our office!

What To Look For In Braces

Braces are essentially metal brackets patched on to a person’s teeth and it has metal wires that run across them in general. They have one purpose and that is to fix your teeth whether it be an alignment issue, a jaw problem, or even a under or overbite. When in the market for braces, you must first see which type your child would want. The main three types of braces are the common metal braces which are inexpensive but perceived as bulky, lingual braces that are the same as metal ones except placed on the opposite side of the teeth, and finally Invisalign which is structured the same as metal braces in the front, but are made of a transparent plastic material. Invisalign and lingual braces costs a bit more but if you are wanting to make sure your child’s teeth doesn’t look crowded with a bunch of metal, these forms of braces are lifesavers.

The Time With Braces

Once your child has braces on, an orthodontist can predict the time period he/she has to wear them. For most people a couple of years will do it, but sometimes it may be shorter or even longer dependent on the situation on hand. There is not much your child can do to speed up the process except to always go to tightening appointments for their braces and to maintain their teeth well.

The Proper Way Of Maintaining Braces

Braces add another tool in your arsenal to get a perfect smile so to speak. It allows your child to prepare for his/her future for straight teeth and to build a proper maintenance on cleaning teeth efficiently and effectively. Although recommended to have braces at least once in your life, the earlier the better it is to helping you make your smile great! Also, children tend to learn new things and pick them up more efficiently than older folks, so learning proper oral hygiene methods is always great. Now brushing is overall staying the same as without having braces but they need to concentrate more and spend a little extra time than before on cleaning every bit of food between the brackets and wires. This may seem like a painful process at first, but they will get the hang of it after a few tries. Another cleaning method that needs more time, is flossing their teeth. The good thing about proper brushing is that it assists them when flossing so it becomes a less tedious job and easier. They will have to pay more attention between those brackets because of those hard to reach pieces of food hiding there will potentially ruin their healthy gums and teeth. Brushing alone cannot do that job alone so that is why flossing is vital with braces.

Once your child loses their braces, they can be confident in their new smile and they will feel great that their teeth are looking great! If your child is ready to get braces at 89014, then you should call Streamline Children’s Dentistry at 702-707-9158 now! 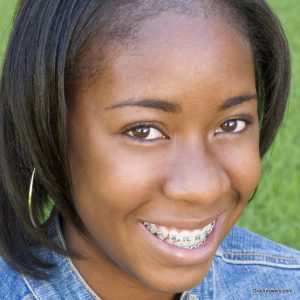